What to Make of Katie Hudnall’s Indirect Path?

Imaginative, a bit cantankerous, yet strangely elegant, Katie Hudnall’s recent woodworks reveal themselves, and their atypical functions, in many layers. There are the spindly-legged figure-like gestures to consider, as well as the exposed joinery, nuanced surfaces and drawings that hint at a past life. And then there are the moveable parts that don’t quite explain why the objects exist. As the viewer inspects this idiosyncratic furniture, he or she wonders about the maker and the meanings suggested by their apparent use.

2009 was a busy year for Hudnall, and as an admirer of her work it was exciting to watch both her creations and her career take off in their own unique ways. The year began with her teaching at VCU (her alma mater) while making new furniture for a list of upcoming exhibitions. Images of Hudnall’s work were published in two books on contemporary furniture and she garnered two exhibition awards from the Society of Contemporary Craft in Pittsburgh, PA. She led a panel discussion at the summer Furniture Society conference in Boone, NC, before ending the year in Madison, Wisconsin as the first recipient of the Windgate Wood Residency. There, during the fall semester at the University of Wisconsin, she created a new group of furniture objects for An Indirect Path, a December solo show at the Art Lofts Gallery.

Containing the fresh line of experimentation, the nine works included in An Indirect Path are close to sketchy. Developed from drawings and intuitively constructed from numerous thinly band-sawn wooden parts that often support a cabinet-type of box, these pieces of furniture have a compelling, toy-like, functional language. The assembly of many individual parts, the seemingly animated appendages, and the arrangement of the finished works in the gallery, all contribute to a busy, but certainly not hurried aesthetic. And these intelligent, but decidedly low-tech, contraptions invite close observation. The slats are weather worn, the support structures have a patina of paint and other marks, and the exposed nails, screws, pegs, and wingnuts hint at the processes and meaning of making things by hand.

Hardware Observatory stands on a scaffold of three thin legs. The bent boat- shaped box leans back, and when opened, reveals its meticulously organized cargo. Like two other works in this exhibition, Hardware Observatory has a small glass lens that allows for magnified peeping into the interior space before deciding whether to open it. Symbiosis #2: Test Cabinet starts at the floor with five spidery legs and continues upward with a single and unexpectedly shifting line of worn and painted boards. It culminates with a small and slatted rectangular cabinet connected with string and pulleys to a functioning umbrella frame that opens and closes with the movement of the door. And conjoined at a wobbly- wheeled base, Symbiosis #3: Pair of Cabinets consists of two tall and thin cabinet forms. The cabinet on the right is taller than the left and, curiously, each cabinet can be truly vertical only when the other is tilted. Seemingly renovated with multiple small wooden patches, the raw orange-colored slats and patinated washers and screw heads create an interesting visual rhythm across the flat fronts. String zig-zags through multiple pulleys to make each cabinet’s fabric-less umbrella crown operate with the opening of the opposite cabinet door.

For whom are these furniture pieces created? Well, that’s not entirely clear. But as these peculiar works are opened up and examined, one might find that they say something about the attempt to make from humble materials a less ordinary life. And, at times, they seem to humorously comment on the human condition. Hudnall’s work might even allow some viewers to reconnect with the joyful imagination of childhood. Lurching lazily across the floor to create a table, shifting back and forth on wheeled teeter-totter bases while viewers operate skeleton umbrellas, or crankily perched on a pedestal studying screws with a magnifier, these pieces suggest not so common interpretations of everyday stories. The works in An Indirect Path are visually, physically, and intellectually open for investigation. But they are nuanced works made by a serious maker. Exploring territory beyond the merely expressive, Katie Hudnall has constructed her own inventive path in contemporary furniture. 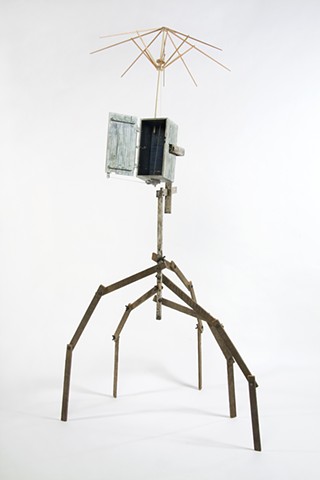